I was working on a new version of my Spirograph Automaton and once I fired up the EV3 software on my computer it informed that a new version was available, including a new 1.06H firmware. I installed both and expected my software to work as it did before. I got some very strange sensor readings. One sensor seemed to overwrite the value of the other sensors. Moreover, once I unplugged and reconnected the sensors it sometimes seem to work again. After rebooting the EV3 it sometimes worked and sometimes it did not. These types of intermittent problems are really annoying and it took me more than an afternoon to figure out that it was not my poor programming skills that caused the problem. Eventually I made a video of the problem and contacted the Mindsensors support.

They replied promptly and informed me that:

“The 1.06H EV3 firmware has a bug in its sensor handler. Even when the i2c addresses are changed the error still occurs. It seems the error stops once the program in executed and then the devices are disconnected and reconnected. This will fix the error until you restart your EV3. If this is too much of an inconvenience, you can use the 1.03H EV3 firmware. 1.03H has been tested and works with the rotation test-ms code. We have notified LEGO about the issue. Hopefully a new firmware fix will come in the near future.”

This information was not available on their website and I hope that my post will safe you some time. In case you want to downgrade to the 1.03H EV3 firmware, have a look at this file. To downgrade place the firmware in the folder (on Mac OS X):

You need to right click on the EV3 software and select “Show Package Contents” to get into the desired directory. The firmware will then show up in the list of the available firmwares in your “Firmware Update” under the Tools menu in the EV3 desktop software. 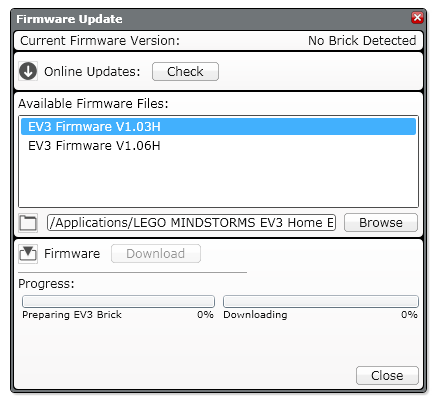