The study we performed on the emotional expressivity of LEGO Minifigures is currently receiving an enormous attention in the media. Much more than the LEGO Minfigure Catalogs that I am publishing as books. I am being bombarded with requests for interviews and statements. The Norwegian news paper “Morgenbladet” even asked me to confirm that this is not an action from the infamous “Yes Men” or any other artist group alike. I share their disbelief how such a little study could cause such a ripple in the global media landscape. I do not think that it deserves that much attention. Why then has it sparked such an intense consideration?

The study showed, amongst other things, that the number of unique LEGO Minifigure faces has increased dramatically over the years and that the proportion of happy faces is declining. Anger is the second most frequent expression. As my wife put it to me yesterday: “So what, there are some angry faces!”.  I agree, there is nothing wrong with having a variety of faces, including faces that are angry, sad, fearful and surprised. They reflect our normal repertoire of facial expressions.

When reflecting on the type of questions reporters asked me I gathered that there is another phenomena that, mixed with the results of our study, does concern many people. Have the LEGO toys become more aggressive and violent in general? This is not a question of the faces on the Minfigures, but on the sets and the phantasy worlds in which they are embedded. Have a look at set 44001 Pyrox (see Figure 1). This certainly looks like a violent demon, if not the devil himself. The question comes up again and again as to whether such toys have a negative effect on our children. 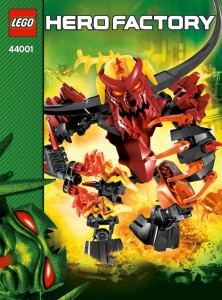 We do already have a big debate about violent computer games and to my knowledge there is no scientific consent as to what effect it may or may not have on children and young adults. The Mega Blocks company even sells LEGO compatible sets that are based on the violent computer game called Halo.

Surely there is a relationship between the artifacts and ourselves. We shape the tools and toys and they shape us. But it is a complex relationship in which causalities are difficult to establish. Our little LEGO study was never intended to give an answer to this question and it certainly cannot even give a hint. We have only been able to scientifically establish that there are now proportionally less happy faces and more angry faces. But this is the main question that has been asked by the reporters. I feel sorry to have to disappoint the reporters and readers. I am not able to give you any scientific proof that LEGO is good or bad for your children.

But I can give you my non-scientific, personal view. I believe the LEGO company has some great toys that help kids develop and the more generic LEGO bricks you buy, the more freedom you give the kids to develop their own imaginary worlds. It is a misconception that the basic LEGO bricks have gone. You can buy a bucket of basic bricks in every toy store right now. I recommend that you, no matter the age, sit down today on the floor and do play with some LEGO. But do not step on them barefoot!

4 thoughts on “Reflection on media response to minifigure study”