Starting in Oktober 2000 the Eindhoven University of Technology hosted several internet radio projects. On this page I would like to summarize their developments until April 2003. 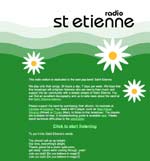 Inspired by the Net.Congestion Conference in October 2001 in Amsterdam at the height of the internet boom the first internet radio station “Radio Saint Etienne” was implemented. It was dedicated to to the band Saint Etienne and played only thier songs. The radio station was based on a Windows Laptop running a Shoutcast server in combination with a Winamp broadcast. This station came to a sudden end when the laptop was stolen from my office at the University. My fascination with Internet radio remained.

The next step was a student project that was hosted at the EESI. The goal of this project was to create the official Internet radio station of the Eindhoven University of Technology. Three students worked extremely hard for six month on the implementation of the station, that we named iMusic. Every student of the TU/e should have the chance to broadcast his/her musical vision, but it was not possible to give each DJ its own music stream, since the broadcast fee of the Dutch Copyright Agency (Buma/Stemra) was calculated by the number of streams. Therefore we decided to implement a scheduling system, in which each DJ would receive a radio show once per week for one hour. The implementation of the scheduling system and the MP3 database was very difficult compared to the creation of iMusic’s webpage and music stream. Most of the effort was put into the server software. It was based on a Apache/Tomcat web server, a MySQL database and a Shoutcast music server.

When iMusic was released in June 2001, approximately 30 DJs created about 40 radio shows per week. It was a great success and the University Newspaper reported several times on the project. The students even presented their work at the ICT-Kenniscongres and broadcasted the Virus festival live.

The main problem with the continuation of the station was the maintenance of the server software. The students moved on to other projects and at a certain moment it was not possible to maintain the server. At the same time the hosting organization, EESI, went through a major reorganization and its support for iMusic was stopped.

Still not willing to give up, I found a new home for iMusic at the new Industrial Design Department. They sponsored a server and the online connection. Not being able to maintain the previous server software we switched to Apple’s Darwin Streaming Server software. It worked with minimum maintenance and delivered a reliable stream. However, it did not allow us to schedule separated shows and hence iMusic was down to one DJ per stream.

After starting my new job at the ID department of the TU/e I had no more time to take care of iMusic and further attempts to motivate the students of the ID department to bring iMusic back to life remained unsuccessful. Therefore we decided to stop iMusic in April 2003.

The main conclusions of this project are that besides the technical implementation of an Internet radio station, the organizational challenges are very high. It takes a lot of time and effort to maintain such an organization. Setting up a Shoutcast server and broadcasting a stream is very little effort and one might be deceived by its ease. The creation and maintenance of a high quality station that involves multiple DJs and shows remains demanding.

I would like to thank the following persons for their contributions to iMusic: Friso Geerlings, Peter Heijms and Martijn Oorschot for the implementation of iMusic, Johan Lukkien and Peter Peters for their technical support, Franka van Neerven for her PR work, EESI for their financial and organizational support and Loe Feijs for giving iMusic a new home. In addition I would like to thank all the DJs that participated.

3 thoughts on “Internet Radio at the TU/e”